The TikiTunes Bluetooth speaker brings ambiance and sound on a budget

Click Here to view the full article By Jason Cipriani. 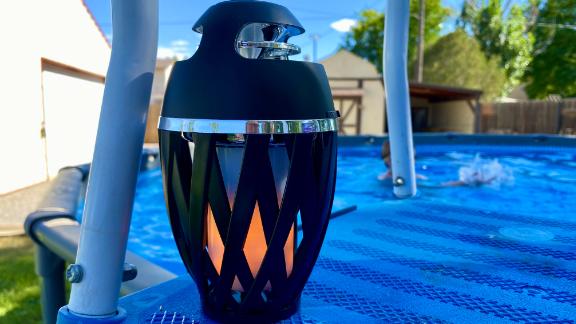 As Bluetooth speakers have become more common, companies have had to get creative with their design, while also aiming for an affordable price point. The end result is a product like the TikiTunes Bluetooth speaker.

It looks more like the top of a tiki torch than a speaker.

We’ve been testing the TikiTunes speaker for the past week, using it in place of the normal outdoor speaker setup we often use when we hang out.

The verdict? It’s a solid speaker that brings more to the experience than just mediocre sound. 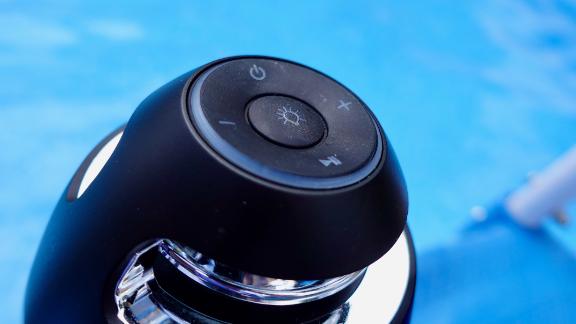 If you’ve connected any type of Bluetooth device to your phone, tablet or computer, then you’re already a pro at setting up the TikiTunes speaker.

Put TikiTunes into pairing mode by pressing the power button until you hear “TikiTunes is ready to pair.” Finish the pairing process by using the Bluetooth settings section on the device you’re connecting to it.

After that’s complete, you can begin playing music, which will stream through the speaker. The process took a couple of minutes for us.

If you’re using two TikiTunes speakers as a stereo pair, you’ll need to complete a few extra steps. The process should require you to long-press the play/pause button to connect the speakers to each other. We only tested one speaker.

You’ll find the power, play/pause and volume/playback control buttons on the top of the device. There’s also a giant button for enabling the faux tiki light that makes up the majority of the speaker.

A white column is visible inside the black lattice when the torchlight effect is off, but pressing the light button on top of the speaker instantly lights the column with fake fire. It’s a subtle effect that looks great.

There’s an LED indicator light that encircles the top of the speaker, lighting up white when it’s turned on or red when it’s charging via the micro USB port on the side.

There’s a small insert that protects the port from water, but it doesn’t stay in place, so be mindful of that if you’re going to keep the speakers outside, especially if rain is in the forecast. 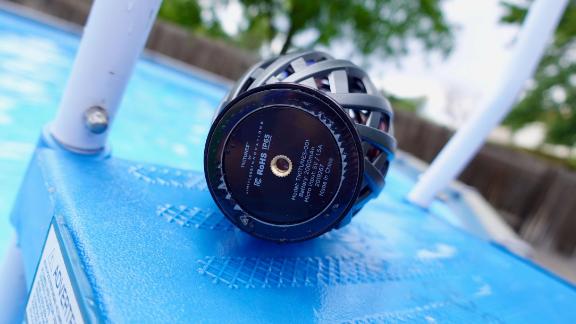 The speaker has an IP65 dust and water resistance rating, meaning it should be able to survive an occasional storm, or, as we accidentally tested, getting knocked into the swimming pool. Just don’t leave it submerged.

On the bottom is a threaded hole to connect a pole or mount — you know, in case you want to complete the tiki torch look. You can buy the pole and ground stake for $14.99, which will let you mount TikiTunes anywhere from 8 to 40 inches high. 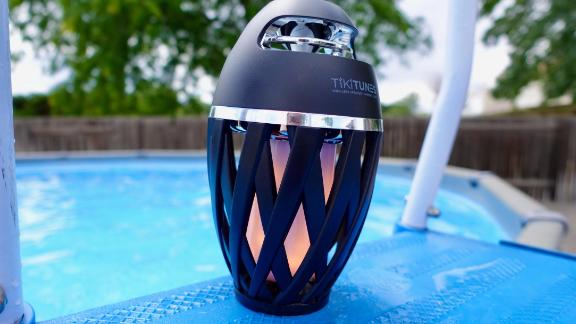 You can control music and volume from the connected device or use the controls on the speaker, but because you use the plus (+) and minus (-) buttons to adjust the volume and skip forward or back, the controls are slightly quirky.

The first time we pressed the + button, we expected the volume to go up. Instead, the track we were listening to — and wanted to crank up the volume for — was skipped. It wasn’t until we referenced the manual that we realized you have to long-press either button in order to adjust the volume. That’s not what we expected. We adjusted, but it means precise volume control isn’t possible.

Another control oddity occurs when you turn on the speaker by pressing the power button.

Instead of a power-up sound followed by another chime letting you know it’s connected to a nearby device, as is the case with most Bluetooth speakers, the same “TikiTunes ready to pair” prompt is played, leaving you with the impression that you’ve entered pairing mode and have to return to the setup process.

After a few times of going through this exercise, and once again referencing the user manual, we realized that phrase is the startup sound. If you wait another second or two, you’ll hear “TikiTunes connected.”

For the curious, there is a dedicated power-down tone.

As far as sound quality goes, a single TikiTunes isn’t going to overpower or blow you away in quality and overall volume. Music sounds slightly hollow, especially at higher volumes, but, for the price, it’s more than good enough.

We can’t vouch for stereo performance.

TikiTunes advertises six hours of use, thanks to its 2,000 mAh battery. Even with the light portion of the speaker on, we surpassed the six-hour mark in our testing. And when the battery drained so low that it no longer functioned as a Bluetooth speaker, the light had enough power to continue flickering.

If you’re looking for a super affordable outdoor Bluetooth speaker that can withstand an occasional rainstorm and add ambiance to your backyard, TikiTunes will do just that.